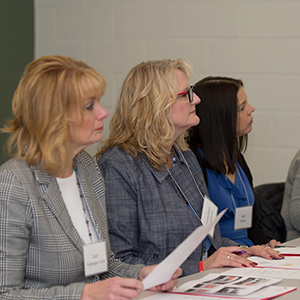 On February 24, the Community Foundation hosted its fifth Stronger Together Series virtual event with a conversation on the experiences of local women in the workforce and during the pandemic.

Drake began by sharing findings from the 2021 Women in the Michigan Workforce report. The report found that between February and December 2020, approximately 136,000 Michigan women left the workforce and that women working full-time make about 78 cents on the dollar compared to men working full-time. In more encouraging news, Drake noted that a Pew Research Center report found women have made significant educational gains, with higher rates of college enrollment and degree completion than men.

When asked how their identity as women shaped expectations others had of them, Hummel talked about being the only girl in her advanced math class in high school. “My friends said, ‘Math is just too hard for girls,’” she remembered.

Other panelists commented that pressure often comes from within. “The pressure really comes from me,” said Burrell. “I definitely put pressure on myself to wear all the hats and do all the things.”

When asked about barriers they have faced, Hummel talked about being denied a promotion after asking why a male coworker with less experience was making more than she was.

“At that time, by asking that question, I was blacklisted,” said Hummel. “I realize now if it hadn’t been for that, I would never have gotten my dream job, but it was a little traumatizing at first.”

Panelists also spoke about the experiences and people who have helped them grow. Burrell mentioned the importance of finding an ally. “Whether you call it mentorship, allyship—I think it’s really helpful for anyone in their career, but especially women,” she said. “You need to have people in your corner.”

Dykman talked about the importance of growing up with parents who “believed there was nothing a boy could do that their daughters couldn’t.” She also shared that she is grateful to have built her career in Newaygo County, “where I had great people to work with.” Dykman said that the lawyers and judges she interacted with “never treated me any differently. They were all invested in me being the best I could be and teaching me.”

During a time for questions at the end of the event, the panelists emphasized the importance of women encouraging other women.

“It’s important to identify those women you see who are up-and-coming and embrace them and be their advocate,” said Burrell.

Dykman added, “It goes back to something like today’s event. Having these discussions and hearing from multiple generations not only helps us understand where we’re at and what we need to do to improve but also where we can from. People like Carolyn made it easier for me, and I can make it easier for those coming up.”

Stronger Together is a series of events designed to look at differences, identity, and the stories that shape our lives. More information on the series—including recordings of past events—can be found at facommunityfoundation.org/stronger-together.